There isn’t much room for shadows these days, at least in contemporary music. Issues like loss, addiction, and mental illness appear, for the most part, to be subjects relegated to the post-punk Goth-rock bands of the early ’80s and the bygone pillars of the ’90s grunge revolution. For Jeremy Dawson and Ariel Levitan, however, it was the shadows that brought them together— even their name stands for “Me and My Shadow.” Though often and regretfully referred to as “funeral pop,” the music created by MXMS is rarely confined to the darker side of the human experience. Their music frequently swells from lush yet painfully intimate lows to rousing and inspirational cinematic highs, demanding to be mined for a transformative film montage. 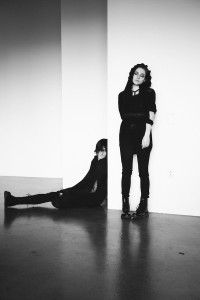 Best known as the Grammy-nominated co-founder of Shiny Toy Guns, multi-instrumentalist Jeremy Dawson—imposing, with raven-colored bangs obscuring his hawk-like angular features—carries himself with the quiet confidence of a battle weary Tolkien Ranger. Vocalist Ariel Levitan evokes a young Alison Mosshart, coupled with the surging all-eyes-on-me effortlessness of Angelina Jolie’s haunting and seductive portrayal of troubled top model Gia Carangi. The duo relishes straddling the fine line between light and dark—as well as navigating, and often deliberately disrupting, the fault line between their fierce desires both to shun industry norms, and to share their music with the world. Currently, MXMS has released only one track to the public, “omg,” a song recorded only moments after the two met in a shared studio/workspace in LA. The song is catchy, beautiful, and shockingly personal.

We caught up with Dawson and Levitan from opposite coasts over the phone to discuss their particular way of doing things, their latest ongoing monthly infusion into Sleep No More this Sunday at The McKittrick Hotel, their tentative and highly ambitious performance art show “Self,” and with little (you decide) success, who is the “me” and who is the “shadow” in MXMS.

KURT MCVEY: What’s up, everyone?

MCVEY: Now that we’re all here, shall we begin?

DAWSON: Yes sir, we are ready.

MCVEY: How did you two meet?

DAWSON: We met in the weirdest fairy-tale way, but without the rainbow and unicorn, unfortunately.

MCVEY: Unicorns are hard to come by these days; it’s what makes them special.

DAWSON: It was more like a foggy river scene, with a rowboat and the Angel of Death at the bow. Basically, I was in a really weird and confused place in life. I had just written a song that scared me a little, and I had no idea who was going to sing it.

LEVITAN: Now for the visual…

DAWSON: My studio is in a building full of writing and production rooms, and literally directly above me I could hear someone pacing around non-stop.

LEVITAN: I was looking for someone who wanted to collaborate on some dark, weird, NIN-type shit.

DAWSON: Apparently everyone was just looking at her funny and returning back to their Jason Derulo demos.

DAWSON: Someone suggested she come visit my room. She knocked on the door, and we sat and talked.

LEVITAN: I had just moved to L.A. from NYC, and I was searching all over for someone whose interests involved something other than Botox and validating their parking, someone who shared similar views who also had a history of darkness, someone who had strange stories with similar musical interests and ideas like myself. It took a lot of courage for me to finally go downstairs.

MCVEY: Were you intimidated in any way? Were you aware of Jeremy’s work with Shiny Toy Guns?

LEVITAN: I was aware of his work, but then again, I’m intimidated by everybody.

DAWSON: I just handed her the lyrics. I was pretty sure it was gonna be awkward, but she looked up and said, “This is me.”

MCVEY: Wow, that’s really interesting and lucky; finding and relating to another musician is not easy. Did you follow up and record that song?

DAWSON: Yeah, that track “omg” was the first and only track we ever released. It was recorded 30 minutes after we talked and I haven’t touched the mix since. That was June 16, 2013.

MCVEY: I want to ask you, Jeremy—NIN’s latest offering, Hesitation Marks, was recorded with breakneck speed right after Trent Reznor finished touring with his wife Mariqueen Maandig, who sang lead for How To Destroy Angels. Were you conscious of Ariel being a muse of sorts?

DAWSON: It’s weird because we sort of muse each other. We have such parallel stories that are different in all the right places. So together, things fit.

MCVEY: Ariel, can you elaborate on this?

LEVITAN: My story and everything that’s gone on in my life has been affected by the fact that I was born with something wrong in my head. I started hospital and therapy visits by the age of five. I’ve been diagnosed with everything short of schizophrenia. My parents had a hard time dealing with this and spent most of our time seeking answers from a flawed medical system. As I grew older, this became increasingly difficult to manage. I’ll put it to you this way, if you take my meds away from me, you will literally have to peel me off the walls. All in all, though, music is my preferred self-medicinal therapy.

MCVEY: Is this the same for you Jeremy?

DAWSON: I’m adopted, never fit in; never felt “normal” or part of the herd. For me, my story is crippled with drug abuse. For a long time the only people that ever showed me real and honest affection were gutter punks, junkies, and the like. To this day, I don’t forget how real these people were and how much of a lie most people are living right this second.

LEVITAN: I tried to fit in with the “normal” kids as much as possible. If I wasn’t keeping to myself, I would do everything in my power to hide my mental flaws from others.

MCVEY: Music is therapy. A guitarist friend of mine seems to only be at peace when he’s on stage and lost in the music. The rest of the time he’s a volatile, emotional mess. That being said, performance can also be like a drug. Most musicians speak about this incredible post-show withdrawal.

DAWSON: Performance is a high, and sleep after a show is not happening, even sober. You just lay there—heart pounding, brain spinning—like a hundred of those little tops from Inception.

MCVEY: I caught your recent show at Soho House. During your set, you did an ethereal cover of Nirvana’s “Something in the Way.” It’s a bold move to cover Nirvana. People tend to steer clear of grunge. Ariel, do you think being a female vocalist allows you to get away with this, more so than a male singer perhaps?

LEVITAN: Growing up, Nirvana was and still is one of my favorite bands. This is my favorite song by them. I was born in the ’90s; it’s something I’ve always wanted to do.

MCVEY: Jeremy, you’ve worked with several dynamic female vocalists, are there challenges in getting behind a masculine voice in modern music?

DAWSON: Ariel has something that delivers when she sings, something very haunting and completely unique. When she sings something, it becomes her own, regardless of whether or not a man or anyone else originally performed the song.

MCVEY: Soho House was another example of MXMS performing in a less-than-traditional venue. On Sunday, December 22, you’re playing during a live performance of the celebrated interactive play, Sleep No More at The McKittrick Hotel. Why this different path? What can someone expect from an MXMS show?

LEVITAN: You will never see us in a traditional rock venue, because we are not a band or a “group.” We only play as part of theater or unique situations like you saw at the Soho House. Me and My Shadow is a performance art show, more on the thespian side of art than something you would see at the Mercury Lounge.

DAWSON: We made the decision early on to create something far away from single-sensory direction. Playing Sleep No More is something we do monthly because we fit in that little flapper bar and we relate to the originality that all of those incredible performers bring each and every night. It’s so much fun. We learn something new every time.

MCVEY: Is there an end game for MXMS? Will there be a feature-length album, a record deal, or a music video? What if NIN asks you to open for them?

DAWSON: Words like “album” and “record deal” aren’t applicable to us, no. We appreciate when people talk about those things, but really we are just so busy working on our script and show that those things just aren’t relevant to our story right now.

LEVITAN: We are building a performance art show currently titled “Self.” The script is simply the parallel life story of Jeremy and I cross-streamed into one girl’s journey. Every piece of music we’ve recorded is a piece or a scene from the script that comes together to form one full song and story that eventually becomes the full show experience.

DAWSON: Yeah, what she said. [laughs] Basically, we’re going to be born on the stage. The show is everything to us.

MXMS WILL PERFORM THIS SUNDAY, DECEMBER 22, AT THE MCKITTRICK HOTEL WITH SLEEP NO MORE IN CHELSEA.

This article was originally published on  www.interviewmagazine.com 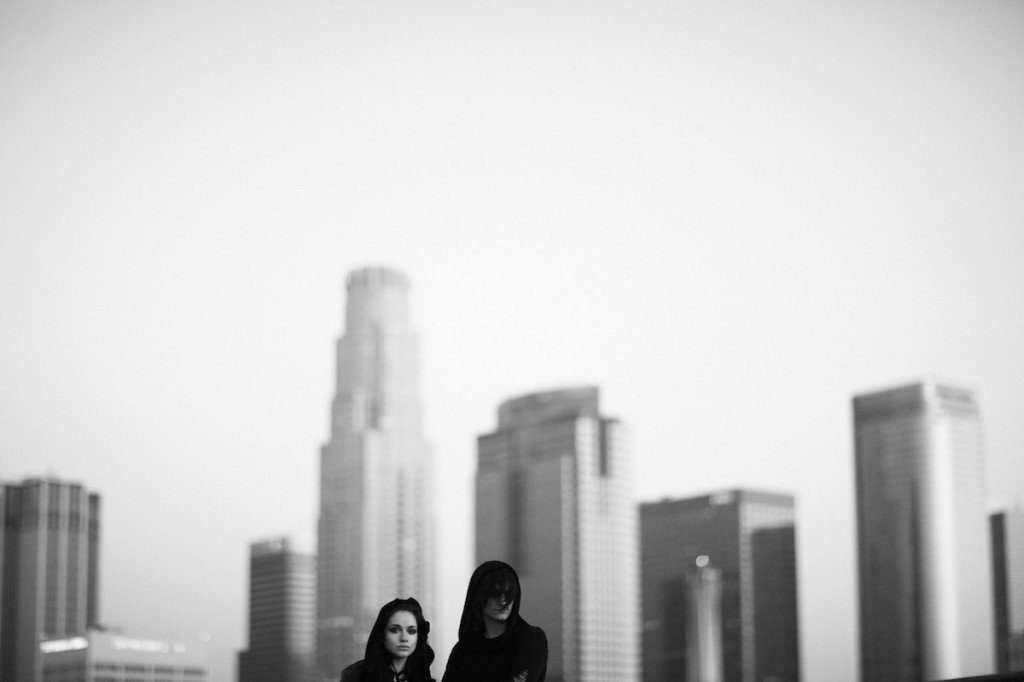